With the final IRB Sevens World Cup looming in 2013, qualification for the best women's rugby sides around the globe is well underway and will become quite intense over the next few months. 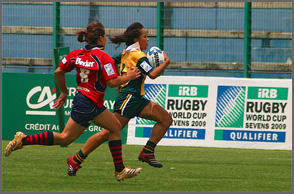 This is the final World Cup - as the Olympics will then take over as the major showpiece event for the sport.

36 out of Europes 37 active womens sevens teams have entered (the only exception being Slovenia) four more than four years ago (new entrants are Ireland, Scotland, Slovakia and Ukraine). Russia are also taking part, even though they have already qualified.

The 24 lower ranked teams will play-off in two pre-qualifiers in Bulgaria and Belgium on 9-10 June. The finalists from each tournament will join the top 12 teams in Moscow on 30 June-1 July, with the top five (excluding Russia) qualifying for 2013.

Fourteen teams have taken part in African qualifying twice as many as in 2008. North and South pre-qualification took place last year, and the remaining eight teams will play-off in Morocco on 27-29 September. As in Europe, South Africa are also taking part, even though they have already qualified, so Africas qualifier will be the highest finishing team in the tournament other than South Africa.

Asias qualifier will take place in Pune on 6-7 October. Entries are still open. In 2008 nine teams took part and although one of these (Arabian Gulf) no longer exists an increased entry is still expected as recent Asian tournaments have included as many as 14 teams. In addition to the teams from Asia, the winner of August's Oceania pre-qualifier will also take part (see below).

The NACRA qualifier will be held in Ottawa, Canada on 25-26 August. Entries are still open. In 2008 eight teams took part, but how many Caribbean teams will be able to travel to Canada is not yet known. Whether or not USA (who have already qualified) will take part is also not yet confirmed. The last NACRA championship included 11 teams.

The South American championship and qualifier will be held in early 2013, venue to be confirmed. Eight teams took part four years ago, and it is expected that the same eight will compete this time.

FORU will hold a qualifier in Fiji on 3rd-4th August - but the winner does not automatically qualify and must take part in the Asian qualifier in Pune - the reason being that the region was granted two places in 2009 but, with both Australia and New Zealand automatically qualifying, these places have already been "taken". Five teams took part in 2008 including Australia and New Zealand who may not play this time. However, even if they do not enter a tournament as large or even larger than four years ago is still possible 10 island teams took part in last years Pacific Games. It is reported that Australia, Fiji, New Caledonia, Papua New Guinea, Samoa, Solomon Islands, Tahiti and Tonga will take part this time.