Scrumqueens Team of the World Cup

We pick our players of the Women's Rugby World Cup. 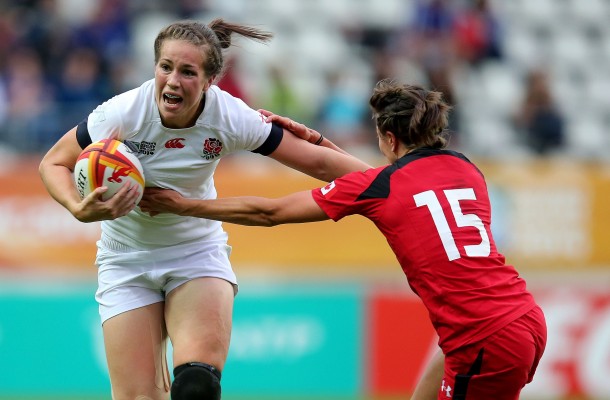 Choosing our team of the tournament was incredibly difficult so high is the standard of play across the board in all positions now. For every player, we’ve left numerous other outstanding individuals out, but our 15 is based on who we felt had the most impact and influence overall.

In the pack, front row forwards like Gill Bourke (Ireland), Rocio Garcia (Spain), Hilary Leith (Canada) and Rocky Clarke (England) are all names who have shone while at lock Sophie Spence (Ireland) and her teammate Marie-Louise O’Reilly have been excellent as well as Assa Koita from France.

In the half-backs, there was strong play from throughout from Jocelyn Tseng (USA) and Kelly Brazier (NZ) and others while the centres were very tough to choose with brilliant players like Andrea Burk and Mandy Marchak (Canada) in the mix alongside the likes of Lynne Cantwell (Ireland) and Sharni Williams (Australia) and lesser known is the huge influence outside centre Anna Yakovleva has in the Kazakhstan team.

There was much talent to pick from in the back three, and Danielle Waterman (England), Ashleigh Hewson (Australia) and Selicia Winiata are all excellent fullbacks who could have been slotted in anywhere while wingers like Kat Merchant (England), Ashleigh Baxter (Ireland) and Camille Grassineau (France) were also in the reckoning.

1 Marie-Pier Pinault-Reid (Canada)
The Canadian prop can do everything a good front row forward needs to do - and do it brilliantly. Excellent technique and strong ball carrying set her apart at the tournament and she was a key anchor of a powerful Canadian scrum.
2 Gaelle Mignot (France)
The French captain was so pumped up before her side’s final game with Ireland that her teammates couldn't but fail to respond with a win. The most passionate of leaders, her work in the tight exchanges, especially at the back of the French driving maul, was superb.
3 Hope Rogers (USA)
An excellent runner, Rogers has caught the eye as a rampaging prop in France and her scrummaging has been more than solid as well.  A tough ask for USA who had a difficult schedule but she shone.
4 Tamara Taylor (England)
The England lock got through mountains of work for her team throughout the World Cup and showcased her ball skills too in the final with a superb dummy to help her side on the way to their first try.
5 Rawinia Everitt (New Zealand)
With lots of top quality locks at the tournament, Everitt’s athleticism and all round skills stood out again for the Black Ferns. With her ability to also play back row, she remains one of the best forwards in the world.
6 Karen Paquin (Canada)
Although really an openside, we had to make room in our team for Paquin, who was truly outstanding for Canada, especially in the last two games of the competition. Her pace made her a constant threat in attack while her defending was  also a hallmark.
7 Maggie Alphonsi (England)
A big game player, Alphonsi’s incredible World Cup Final performance means no-one can dislodge her from her position as the best seven in the game. She was phenomenal in the final, saving her best till last but tackled her socks off throughout the tournament overall too.
8 Kelly Russell (Canada)
The Canada captain is an inspirational leader and the rangy number 8 was a huge force again at the World Cup. With top ball skills, she also showcased her tenacious appetite for defence. A tournament to be proud of.
9 Mo Hunt (England)
Quite simply outstanding throughout the two weeks. Hunt is one of the most dangerous broken field runners in the women’s game and her eye for space was crucial for England all tournament.  Constant sniping and pace makes her a nightmare for fringe defences.
10 Katy Mclean (England)
Mclean remains the best and most influential flyhalf in the game.  When she came on late in the pool-stage draw with Canada you could just sense England calming by her presence alone, and her organising and distribution behind the English pack remains second to none.
11 Honey Hireme (New Zealand)
Though she was kept quiet by Ireland in their one loss, Hireme was a powerful force for the Black Ferns out wide - especially against USA in the final game where she dotted down four times. In the side who score more points than anyone else she saw plenty of ball.
12 Amiria Rule (New Zealand)
A difficult call here as Andrea Burk had a great World Cup, but Rule, in her final outing for the Black Ferns was imperious in midfield with her intelligent running and great link play - she set up rafts of tries for her side.
13 Emily Scarratt (England)
Scarratt has long been the best outside centre in the game and she did not fail to deliver here. Even without her imperious goal kicking input, Scarratt was a nightmare to defend against and in the semi and the final she was the best player on the pitch. Grabbed the final by the scruff of the neck with an awesome try.
14 Magali Harvey (Canada)
The player to emerge with much of the headlines from the tournament and deservedly so. Harvey’s pace and finishing gave us the try of the year against France and defensively she was also excellent. Her kicking was also important for Canada and we will hear much more about her in the years to come.
15 Niamh Briggs (Ireland)
While she will be disappointed with how she went in the semis, overall Briggs had another excellent campaign for Ireland. Amid lots of top fullbacks at the tournament, Briggs’ intelligent kicking sets her apart and her counter attack for Ireland’s winning try against New Zealand was world class.