Welcome to part one of our look back on 2022, a year when the game emerged from COVID, expanded like never before, and Scrumqueens entered its teens 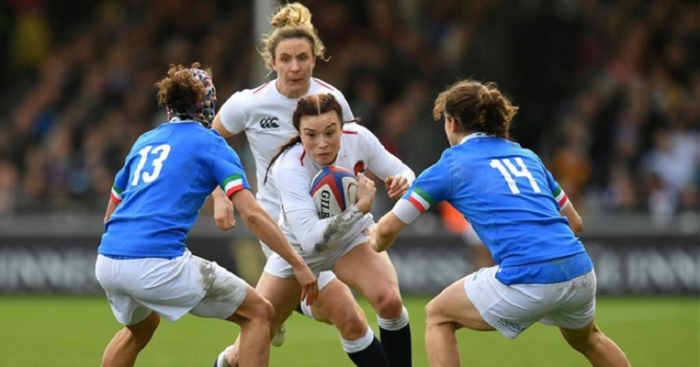 2022 was a remarkable year during which we published 234 stories and features on the game around the world. What follows today and tomorrow will be my highlights from the year, based on everything we have covered, to be followed next week by Ali Donnelly's top stories and look ahead at 2023.

Scrumqueens reached its 13th birthday in 2022 - which is (though we say so ourselves) quite impressive for a website mainly created to cover the 2010 World Cup.

Thirteen years ago we were chasing stories, picking up on small mentions in passing of events and matches that may or may not have taken place. There were no test rankings, no World Series, few (if any) press conferences, very few press releases, no TV coverage.

The world of 2022 could not be more different.

Women's rugby, at least in the leading nations, gets levels of coverage that were beyond our wildest dreams in 2009. Newspaper reports - newspaper front pages. Live TV. Podcasts. Magazines. Books.

From a world where finding who was in the team was a challenge to a world where we now know how far they ran, and plenty more. Not quite yet down to what they had for breakfast, but in 2023 who knows?

The challenge today is often keeping track of the waves of information now appearing, especially from World Rugby, the Six Nations and Pacific Fours unions, and not letting it dominate the stories from the rest of the world.

Scrumqueens has always aimed to cover the world of women's rugby, not just the major nations.

In 2022, women’s test rugby filled grounds again and again around the world, with player numbers rising (we are told, though World Rugby does publish the actual data these days, which is a pity), with young girls inspired by the players they see on their TV screens and read about on websites and in magazines. Young girls entering their teens, perhaps, just like this site.

At the start of the year international rugby was still finding its way out of the COVID pandemic. The first scheduled test for the year – Spain against Italy – was cancelled due to COVID fears, and Samoa and Hong Kong were forced to withdraw from World Cup qualification.

The World Series – which had restarted at the end of 2021 – continued as a truncated affair over six tournaments in four countries, losing all of its southern hemisphere rounds, missing its defending champion New Zealand from the first four tournaments, and with other core teams coming and going for contractual and political as well as public health reasons.

The result was at times messy and inconsistent - with some core teams fined tournament points for missing tournaments, others being awarded nothing, and some being credited with extra points (how New Zealand officially went from 38 to 57 points, jumping from 7th to 5th overall, was never explained) – but the most important thing was that the series was back.

Elsewhere the qualification process for the World Cup was finally completed, and by the end of the year test rugby had finally returned to Asia, with South Africa visiting Japan in July, and Hong Kong finally playing Kazakhstan for the Asian Championship in December – albeit too late for the World Cup.

The growth of international women’s rugby continued, with the game healthier than ever.

In sevens, despite the cancellation and reduction in the size of some sevens events especially at the start of the year, we recorded 96 nations fielding an international team in competition (the fourth highest ever), with four making their debuts, playing the third highest number of internationals ever in the year – 664, behind only 2019 (840) and 2015 (753). And Mongolia becoming the 149th women’s sevens nation in August.

Test rugby saw over 100 test matches in a single calendar year for the first time (the final total was 101), with a record 40 teams playing the international fifteen aside game.

After a few dry runs in 2021, a formal Africa Cup tournament also began with 12 nations competing for places in the 2023 finals. In Europe the European Trophy expanded to five teams, despite one – Sweden – being promoted to the Championship. North America also saw the RAN championship expand from 10-a-side to 12-a-side, with the eventual intention to move to 15s.

The game has also expanded in another way – the bookshelf. Prior to this year only three books had appeared on the women’s game, and two of those were in French. This year that number more than doubled. As well as our own book – Scrum Queens, by Ali Donnelly – we have seen Rubi Tui’s Straight Up; World in their Hands: The Story of the First Women's Rugby World Cup by Martyn Thomas and Rikki Swannell’s Sevens Sisters. Game On by Sue Anstiss also included many women’s rugby case studies throughout her book on women’s sport.

Tomorrow... the highlights on the field