Landry relishing Canada's on and off field growth

Canada's captain Ghislaine Landry has been one of the standout players on this year's Women's Sevens World Series. We caught up with her ahead of the fourth leg of the tournament which takes places 22-23 April in Kitakyushu, Japan. 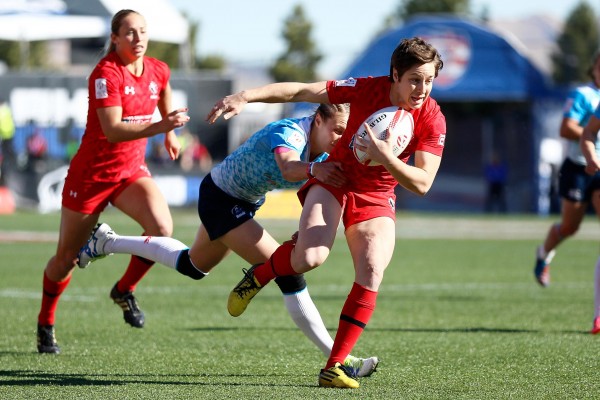 Canada go into next weekend’s tournament third in the series standings with 46 points. They are 10 points behind series leaders New Zealand but only four points behind second-place Australia. Canada holds a 10-point cushion on Fiji who sit fourth.

First of all how are you enjoying the captaincy role this season?
It’s been a fun season so far. Last year was so intense with the Olympics, and this season has been a lighter atmosphere, the team is playing well and it's been a joy to lead the girls. We work with a leadership group, which I have been a part of for the last four years so it’s not that big of a shift for me.

After the success in Sydney there's quite a gap between tournaments - what has the squad been focusing on?
This has been the longest mid season training block we’ve had in a long time. As an athlete when you see such a big gap in your calendar you know there is going to be a lot hard work to be done. We had a big training push in the gym and on the field, and looked to being more consistent across a tournament.

How pleased were you with that win and what areas were you most pleased it?
We’ve never won a tournament so early in the season, so that was a big positive. The biggest thing for me was that it was a 12 person effort. We know seven players are not going to win a tournament, and when everyone is playing well and doing their jobs, we know our 12 can beat any 12 on the series.

With the World Cup also coming up this year, how is Canada doing in preparing on both fronts - has that had any impact for the 7s team?
Rugby Canada made the decision to separate the programmes and player pools. A lot of past sevens players are now playing in the 15s team and it’s great to see them doing well. Both programmes are top three in the world and I think that shows well for the future as well as upcoming World Cup results.

How much of an impact did the medal at the Olympics have on the game in Canada?
We came home to so many new rugby fans, it was incredible. The Olympics are such a game changer for a sport like rugby in Canada with very little mainstream media attention. So many people got the chance to watch rugby, and I have yet to meet someone who watched for the first time and didn’t love it. We’re also seeing more kids that are interested and excited to play rugby. In Victoria (where we are centralised) I recently heard that middle school programmes jumped from four last year to 12 this year - that's huge!

Host teams never seem to do quite as well at their own tournaments - how do you plan to change that in Langford?
The first year we experienced all the distractions and media storms that surround hosting a World Series tournament and it got the better of us. Last year, I think we managed that well but were a little unlucky on field. This year, we know what to expect and the biggest thing will be staying on task and in role, when we do that we know good things happen.

Your own form seems to be getting better and better - what do you put  that down to?
99% of what we do is train, and I love that part of it. I know I can be better and I want to keep learning, so right now I credit on field performance to that mentality. There’s obviously a lot of physical work being done, but I think that mindset goes a long way.

How do you manage to make sure you have balance in your life with all of the training and travelling?
Haha, depending on who you ask they would argue whether I have balance. I try to turn off from rugby when I can, but it’s actually one of the toughest parts of the job.

What are Canada's aims for the rest of the season?
We want to keep building off of each performance. We’ve performed well in the last two tournaments, but only for five games. We will be looking at maintaining that level across 6 games.