We caught up with retired Canada captain Jen Kish on life after rugby and look ahead to the World Cup 7s this weekend. 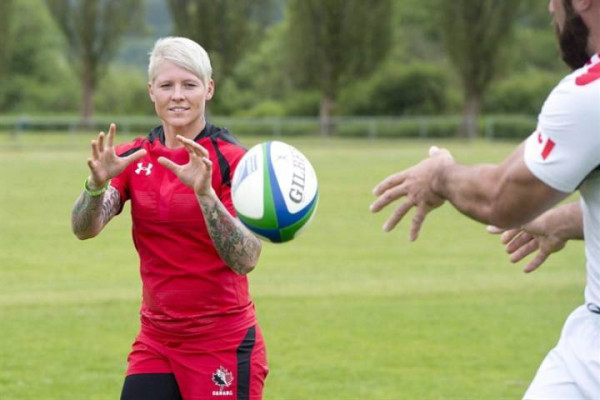 What have you been up to since retirement?
Since retirement I have been focusing on my Personal Training business, helping people achieve their fitness goals. I have gone back to the grass roots in rugby and took on an assistant coaching position with my club rugby team The Edmonton Rockers. I also have had many visits with my surgeon and am waiting for the call to get my hip repaired.!

You were a full time athlete - how difficult would you say the transition is back to "normal life"
The transition was scary and difficult at first because for the first time in 13 years, I had no routine but at the same time it was exciting because I had control of my everyday activites. Shortly after my retirement, I started to put my "plan B" in motion and created new goals for myself. I am very content with where I am at in life right now and am thankful to be in a good place because this kind of transition can be very difficult.

Do you miss being out on the circuit?
I do. I miss being on tour with the girls & creating new memories with them. I miss playing against the best teams in the world and I miss the game of sevens in general because of the joy it brought me.

What's the best thing about retirement.
Honestly, it's being home with my partner and reconnecting with friends. To be around to attend friends' birthdays or other events has been amazing and I am happy to not have to give those things up anymore

When you look back now what would you call the highlights of your career?
There are two. The first is when we won our very first Series and qualified for the Rio games in 2015 and my secons highlight is when we won bronze in Rio. That was a turning point in rugby here in Canada because we inspired our nation.

How well set do you think the Canada team is for the World Cup?
The team has had a tough, inconsistant season, with some player turnover and injuries playing a factor but they are a resilient bunch and I believe the team is 100% capable of becoming World Cup Champs at the end of the day. If they work together as a unit, and execute their roles and are on point, they become a nightmare for other teams & are hard to stop.

What do you think of this new format?
It's unreal. As a player, it sucks becuse there is little room for error but as a spectator it becomes even more exciting because mistakes are costly and it's hard to pick who will walk away as champions.
I will be enjoying it and watching it with a beer in hand!

What is it like as a player preparing in the days before these big tournaments and what advice would you give knowing all you know now?
It's stressful and exciting. My advice would be to trust the work you and your mates put in and don't strive to play perfect. Every team has talent, fitness and skill. It will come down to which team is willing to go to that dark place to out work their opposition and who will make less mistakes.

Who do you think looks best set to win?
If had to pick, I would go with the most consistent team this season which is New Zealand. With that being said, this new format really throws a wrench in things because I don't know who will actually show up to play a solid 14 minutes.