France ready for the autumn

For the third of our guest articles we welcome Selina Galtier Réaux of French website Rugby Au Feminin.

Rugby Au Feminin filled a notable gap when it appeared in 2014, when the World Cup took place in France, to become the leading website devoted to the women's game in France. 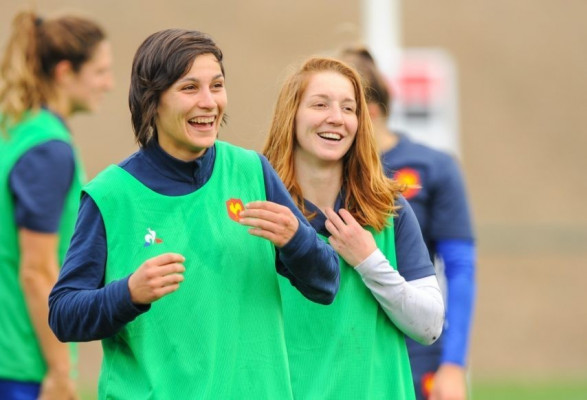 In the midst of these unusual times, France returned to national training camps during the summer. The camps took a careful step-by-step approach as the players were not in the same condition after lockdown, and a few new young players were added to these sessions.

The domestic elite Championship also started quite early, at the beginning of September. This year the Championship changed, with first part putting the 16 teams into four pools of four after which we will have a play-off and a play-down.

Four teams will leave the Elite1, in order to reduce the elite championship to 12 teams next year with the aim to have less disparities in the overall results.

This year, sevens squad players have also been available for clubs, which wasn’t usually the case in recent years.

Unfortunately a lot of games have been postponed due to Covid cases in some of the clubs. Some clubs were not able to train properly as a result, as restrictions obviously increase the difficulties in organising everything.

On top of all this France have just announced a curfew in most of the big cities, which means that clubs will have to innovate!

For players who also have jobs (which means almost all players who are not in higher education – there are no full-time professionals in France) this might be tricky.

Looking back , some 72 players who have worn the blue jersey since January 2017, when Samuel Cherouk became coach.

Several great players have since finished their rugby careers, such as Elodie Poublan, Christelle Leduff, Caroline Ladagnous, Lucille Godiveau, Manon André, Laetitia Grand or even Julie Duval to name only the most capped.

Gaëlle Mignot, 70 caps and former captain of the national team,  no longer plays for Les Bleus but she is still a player in Elite 1 with her club Montpellier.

Since the last World Cup France have played 23 games, with 15 victories and 8 defeats - including 5 against England, the bête noire of Les Bleus!

Three players played in all of these games - captain Gaëlle Hermet, Céline Ferer and Pauline Bourdon.

A squad of 32 players were announced this week for the four international games – two to finish the Six Nations, and two tests matches against England. There are no big surprises on that list. Two sevens players make the squad: Coralie Bertrand and Jade Ulutule. There is also the big return to international XVs for Marjorie Mayans and also a return after long term injury for Maëlle Filopon and Yanna Rivolaen. Only two "first choice" players are absent.

Taking a look in more detail.

18 players have been tried by Samuel Cherouk since he took office. At hooker Caroline Thomas and Agathe Sochat have been called upon most often, along with Laure Touye who can play hooker or prop.

At prop, the sudden departure of Julie Duval left a void, but Lise Arricastre, Clara Joyeux, Mailys Traore and Annaelle Deshayes are the four most commonly selected players. All are available this autumn. Prop Ait Lahbib Arkya also returns to the squad after a four-year absence. Rose Bernadou is only new cap is in the squad.

Experienced Safi N’Diaye (75 caps) and Audrey Forlani (50 caps) are well established at their posts, but Audrey is unavailable this autumn. However Lenaig Corson returns from injuries and sevens.

Céline Ferer, Romane Ménager and Gaëlle Hermet have formed a formidable trio in recent years, but Romane Ménager is unavailable. In her place Marjorie Mayans returns along with Coumba Diallo who was sidelined with injury but is now back. Young players competing from places in these positions in the squad include Emeline Gros and Axelle Berthoumieu.

The indisputable player over the past three years has been Pauline Bourdon, capable of playing both at 9 and 10. When at fly-half,  Pauline was most associated with Yanna Rivoalen before her injury, then with Laure Sansus recently. Both players return to the squad for the autumn, along with Morgane Peyronnet.

The pair of centers has changed a lot in recent games, mainly as a result of injuries. Gabrielle Vernier and her brilliant tackling pairs well with the versatile Camille Boudaud – and both are in the squad. Maëlle Filopon, injured twice against NZ, has not yet been able to fully express her talent but is back to full fitness. Also in the squad from Sevens are Jade Ulutule and Coralie Bertrand.

Caroline Boujard, Marine Ménager and Cyrielle Banet have been the most common selections for the wings and all three are fit for the coming games.

Jessy Trémouliere, voted best player in the world in 2018, is clearly the incumbent in this position. If she is unavailable Caroline Boujard will most likely play in this position, but Elise Pignot is also available as a back-up