Last week's World Cup qualifiers featured a number of very one-sided games and it was not the first tournament in the past 12 months to do so. Is there a problem with European women's international rugby? And if so, is there a solution? 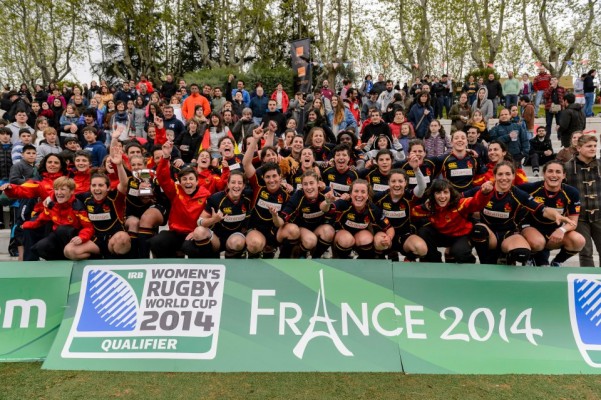 As the fifteens season draws to a close, taking the temperature of international women’s fifteens in Europe can be a difficult, if not contradictory, undertaking. This was never more typified than in the last week.

On the one hand we had a European World Cup Qualifier that betrayed the vast gulf separating the top six or seven teams on the continent and the rest. To have Spain, nominally the seventh-ranked nation,  putting over fifty points past both the eighth and ninth ranked teams, resulted in games that were not only disappointing as contests, but was also a major cause for what turned out to be a unbalanced tournament that saw clearly the second-best side finishing fourth, despite beating both of the sides ranked above them by comfortable margins.

It was not an isolated incident either. During the 6 Nations this year, the second and third ranked nations (England and France) both beat the sixth ranked team (Scotland) 76-0, and last year’s European “B” tournament saw the Netherlands and Sweden (who were so well beaten last week), beat Russia and Finland - ranked only just below them - by 67-0 and 105-0.

Such huge gaps in the relative strength of teams is a concern. It does not encourage competition or sell the game to a wider audience when matches between similarly ranked teams are so often  so one-sided. Defeats such as these were a significant contributory factor behind attempts to restructure the 6 Nations recently, as well as the reluctance of several smaller nations  to take part in European Championships or World Cup qualifiers, or play international Fifteens at all. And, of course, the rise of Sevens has done little to help the situation.

However, all of this is very positively balanced by other stories that show that, perhaps, fifteen-a-side rugby is not quite as threatened as it may appear. The Czech Republic – who only previously played test rugby eight years ago when they met Austria in a couple of games (both, remarkably, drawn 5-5!) – have formed an official women’s fifteen. Their first training camp was held in Brno on 13th April, and they are due to play a home test match against that other good news story – Switzerland – in Smichov on 29th June.

The reason for this grass roots growth was explained by Switzerland’s captain - Carolin Reischauer – recently: “Fifteens rugby is exciting, it’s fun”, she said, “and a lot of women want to play.”

However, she also highlighted the problem that she believes smaller nations have. “Things are not well organised. There are only competitions for the big countries and there’s nothing really organised for the everyone else. It’s important that many countries like Switzerland just start developing their XVs teams, but this needs competitions.”

To be fair, FIRA do organise an annual fifteens tournament with the expressed aim promoting development, but in practice these are dominated by Spain or the "A" teams from Six Nations unions - far too powerful for the likes of the Swiss at this stage in their development (as Finland discovered a couple of years ago). Which is why Switzerland - as well as Belgium, the Czech Republic and players from Germany – have begun to organise friendly games of their own.

The only way to improve is to play. Italy have shown that recently. Not content to just play in and prop up the Six Nations, they have taken every playing opportunity that has come their way and have closed the gap with the rest of the sides so that they are now a respected, and at home especially, even feared opposition, capable of beating almost anyone.

Teams that have played very little have tended to struggle. Although problems caused by the reorganisation of the Swedish union, and the loss of players to Durch sevens team were significant contributory factors in the failure of their teams in Madrid, the fact that neither had played any test rugby at all since the final of European “B” Championship last year (and precious little before that) was not a insignificant factor.

Wales and Scotland have also generally failed to organise many playing opportunities for their teams outside the 6 Nations – even withdrawing from the European Championship last year – which cannot have helped in their attempts to keep up with teams which have been more active.

One positive that did come out of Madrid was to see how the Netherlands, Scotland and Sweden improved as the week went on, learning from the experience. Potentially though, for some of them, much of this experience may now be lost until the next major qualifiers.

Above all the way to avoid these big defeats and be competitive is not to avoid playing, but rather to play more. This might include taking opportunities to enter appropriate tournaments, but simply organising one-off friendlies against near neighbours must help - Scotland and Sweden used to play quite regularly, for example.

An additional - or even an alternative - way to develop a strong international team appears to be to have a strong sub-national representative programme, such the provincial tournaments in Ireland and New Zealand, the state competitions in Australia, Spain's regional championship, or the Super Fours in England. It is certainly worth recalling how the French coach told us, during the Six Nations, that he sees their reliance on just their clubs to develop players as a major handicap.

Sevens may have the glamour, but Spain have now shown that even that is no excuse if a nation wants to play fifteens. You can, with careful planning, successfully ride both horses even if your player base is small, and even if your Union is not cash rich.

It needs careful planning, organisation, and above all will and desire. As Carolin Reischauer suggests (and as the Swiss, Czechs and Belgians have shown), the players have the last two, the question for those nations that are falling behind is whether those in charge can provide the rest.