Courtiex: Utilising the power of sevens

David Courteix has been coach of the French women’s sevens team since 2010, which in women’s rugby terms is forever. After that silver medal French website Sevens Rugby spoke to David about the last five years since Rio. 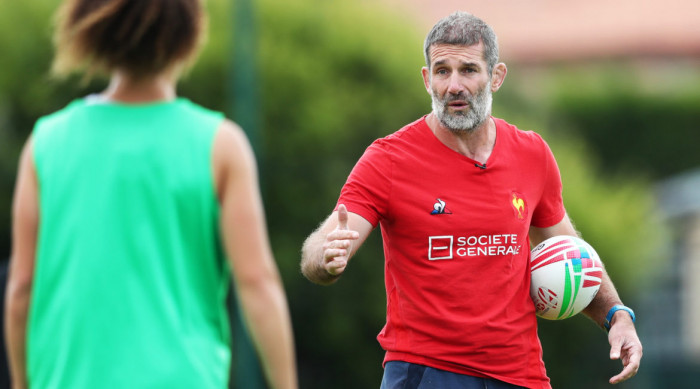 The world of women’s rugby in 2010 is unrecognisable tday. It was world were sevens at the Olympics was a little more than a lofty ambition, a women’s world sevens series a distant dream, and the idea of professional women rugby internationals a complete fantasy.

It was into this world that recently-retired Clermont centre David Courteix stepped in 2010 when he was appointed coach of the women’s national sevens team. At that time it was not a particularly high profile role. France played just one tournament each year – the European Championship – where they tended to finish around fifth in the “Top 10” - not flirting with relegation, but not seriously challenging for the title either. They had just ended the first World Cup without a win. David's problem was that the French Federation were simply not very interested in sevens. When the World Series began France were not a core team. As the first competition reached its climax in Amsterdam, David and his team were to be found warming up for the European Championship on the back pitches.

It took five years and the Olympics to change all that. France narrowly qualified for the 2015 World Series (as runners-up to Fiji) and then entered the qualification process for the Rio Olympics at the last possible moment. Yet they won a place at the Games and have continued on an upward trajectory ever since, including runner-up spot at the last World Cup and now silver at this month’s Olympics in Tokyo.

How did he feel after his team won silver?

“I have always had great confidence in this group and in what we had done with the staff to help the team achieve what they wanted. But I also know that a lot of nations and athletes had also worked really well, so in the end the first feeling was one of relief.

“I was very relieved that that the team did not leave with nothing. Even if my joy was no apparent - I am not very demonstrative - I was delighted that this Olympic cycle ended with something wonderful. In competitions like there is always the unexpected and we were prepared to adapt anything. It the end it pretty much went as we hoped for.”

“I think that our stability has made it possible to build an understanding that comes from the fact that we have known each other for a long time. In the six French teams that won medals at the Olympics the staff have all been in place for a long time. That made a difference when hanging on against Great Britain or in our first match against Fiji. Everything could have gone one way or the other. The players stayed in control. "

“The idea was to create the optimal conditions where we could get the best out of everyone, and it is a great success. Everyone played their part and took responsibility for their performance and the result. The team have been very consistent. When attacking our aim was to keep the ball alive in the spaces. Defensive is our trademark and it remains a strong base where the team is confident. But in the final we faced a team that masters the static phases to an incredible extent. It is right that New Zealand became the Olympic champions, even though I would have liked it to be France. Fanny [Horta] and her teammates can be proud of their place at the top of the world game.“

How France’s approach to sevens has developed

“It's funny because in the imagination of people, sevens is fast, athletic rugby. I have to say that it is quite the opposite and that the contact zones are absolutely essential. The phases of tackling, hitting, one against one, the ability to free the arms, to keep going forward, are key moments in sevens.  Our first objective in defence is to recover the ball. The second is to force opposing teams to go through rucks. There will be a lot look at, study and reflect on all when we look back on the final.

“I think we had the means and the desire to try to do everything possible to find a way out of every situation we faced. This is what has changed.”

“In our French culture, ambition if something that is difficult to handle. We love the magnificent losers, the panache, the beautiful game and identify with that. I believe that French team sports are starting to take on this heritage and point the finger at its limits. It's the same with respect to humility and ambition. For a long timewe had this ambition to win, but it was difficult to say so. Today, I think we can afford to while still respecting her opponents."

“If women's rugby sevens had a higher profile, Fanny Horta would be the one the greatest French sports personalities. With her longevity, her performances, her ability to question herself and to develop, and in particular in her way of playing, she is a huge rugby player who has shown an extraordinary ability to adapt.

“I also remember the woman who knew how to contribute and how to listen. The best thing for me is that she was so determined that she will not fail. She passed this on, gave everything, and knew how to delegate so that we do not complain when she was absent. The team is ready to move on and that is Fanny's legacy: to have been indispensable without ever having wanted to be. I think the players have understood it well and it is their strength to have prepared for the adventure to continue without her. This is what I admire. "

“There is character in this squad, it clings, it battles, it shouts out, it's alive. But when it comes to bringing everyone together, everyone has to put the team first. It's not easy to be number 13, 14 or 15 in the squad, to have less playing time than the others. I think back to the joy of Carla Neisen at the end of the semi-final. She had not set foot on the field, although she is an exceptional player, but she was as happy as the others. The role of Nassira Kondé was not obvious either and when I see her investment from start to finish, it is a sign that the collective project is strong. This squad has understood that one of the keys to success is to forget yourself a little in the name of a collective ambition. This is what makes me the happiest because these things, invisible to the naked eye, fuel performance. Rugby is simple, but simplicity is hard. To do it very simply, very quickly, very well and all together, it is not easy. I take my hat off to the players who have embraced these concepts and made them their own. "

“The great strength of this group has been the mix between the builders who were there at the start and those who joined the team later. At the beginning, we took setbacks and it was difficult to marry this experience with our ambitions. Those who arrived afterwards, younger and more carefree, wanted to help the group achieve these ambition: now, we want to win, why not say it? Some have learned from others. In his book “The Reign of the Freed”, Claude Onesta said that it was easy to love each other when you won. The big advantage of this team is that they had to love each other before they won. When you lost and you still learned to like yourself, it's pretty easy keep going down the same path when you start winning. "

Two disciplines at a turning point

"I really hope that this medal will have brought more visibility and passion to people whether they who know rugby or not, or sevens, and that we will finally take into account the added value that we can provided by rugby in France. The Olympic Games, for me, were the absolute dream. This is what gave me the taste for sport. I think this is one of the roles of the French teams and I hope there will be this effect. I also hope that the Federation will manage to make a better place for sevens in the calendar, in terms of coverage, and player training. A whole bunch of projects have been launched and I hope this medal will boost them. "

“Sevens and fifteens can cohabit without problem, I am sure. We already see it with the women and we could see it with the men. I even think it's even more vital for the fifteens. What will become of the game if - apart from England, France, New Zealand and maybe the United States - no one can win the World Cup? If these teams put 60 points to everyone and the games become almost dangerous? We have to develop the game around the world and guarantee the universality of rugby and, for me, you have to use the power of the sevens. It's more accessible, there are fewer people on the ground and less complex rules. It can produce a beautiful game and wonderful athletes, very good rugby players and rugby women, all over the world. It is the ideal step with Olympism.

“Before the World Series starts in December, the girls have been invited to a Fast Four in Edmonton and Vancouver, alongside men's tournaments, with Canada, the United States and possibly Great Britain. All the girls who have participated in this quest for a medal but did not get on the field in Tokyo will arrive with a great appetite to prove themselves. For now, we can bask in the silver and for a few months, but we will also need to capitalise on the frustration of not having won gold. This will make a great combination which should push the team to ask new questions and build other ambitions for the future. "

“In our French culture, ambition if something that is difficult to handle. We love the magnificent losers, the panache, the beautiful game and identify with that. I believe that French team sports are starting to take on this heritage and point the finger at its limits. For a long time, we had this ambition to win, but it was difficult to say so. Today, I think we can afford to while still respecting her opponents."

"What will become of the game if - apart from England, France, New Zealand and maybe the United States - no one can win the World Cup? If these teams put 60 points to everyone and the games become almost dangerous? We have to develop the game around the world and guarantee the universality of rugby and, for me, you have to use the power of the sevens."