Russia recently appointed their first overseas coach for their sevens team. We spoke to Graham Bentz about his first few months coaching the Russians, and he gives us a fascinating inside look into the Russian camp. 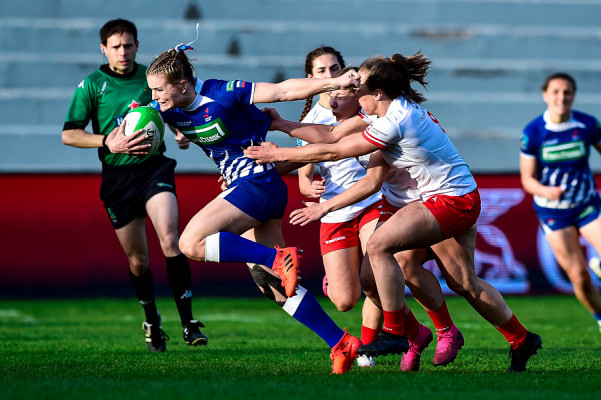 Graham Bentz is sports scientist and rugby coach from South Africa with wide international experience, including age grade levels in South Africa, the Kenyan men’s team, as well as spells in Namibia, Germany and Georgia. In December, after a spell in St Petersburg, he was invited to help Russia’s women’ sevens team qualify for the Olympics as the Head of Performance and Assistant Coach.

Russia have won six out of the last seven European sevens titles but have never quite managed to transfer that form into the World Series, where in five out of the last six series they have finished behind their greatest continental rivals – France.

An even greater problem has been winning a place at the Olympics. On three occasions Russia have been one game away from a place at the Games but, on each occasion, they have lost games they were expected to win.

Graham is in Russia to help ensure they get over the line at the fourth attempt, in Monaco in June, bringing a new voice and a new, neutral, eye.

It is clear that Graham has been very impressed by both the players and the facilities available to him.

Graham describes the Russian squad as “the most hard-working players I have ever worked with. True professionals. Arriving early for training sessions, with a real understanding of the game and a hunger to succeed”, while the team and coaches have access to the best Russian Olympic training venues, with high quality support staff and facilities.

Government support for the Russian team is on a different level compared to when they first burst onto the international stage under Pavel Baranovsky in 2012 when he virtually seemed to run the team on his own. With the Olympics a realistic possibility, talented athletes from many different sports are finding their way into rugby, joining other players with a rugby background. A production line of young players coming up keeps the older players on their toes.

The aim is to build for the future, but Olympic qualification is the key.

Graham speaks of introducing performance data to help improve the basics – objective targets for the players with attainable goals. Most training sessions , and higher quality sessions.

A “leadership group” made up four of the most experienced players - Kristina Seredina, Nadezhda Sozonova (was Kudinova), Alena Tiron (formerly Mikhaltsova) and Bayzat Khamidova – has also been set up to involve the squad and bring on the rising stars.

For Madrid the squad had a camp in Sochi in November/December, followed by another at altitude, where they concentrated on skills and conditioning, and putting systems in place, as well as sessions to improve passing and spatial scanning. The result was two tournament wins, and - what was particularly pleasing - two wins over France.

The Covid pandemic remains a challenge for the Russian team as much as it is in all countries. The players have a strict routine of regular tests and five days of isolation before every camp, which means that no Covid cases have come to light during training.

However, the players do have to leave camp to go home to their families and clubs, and many of the players have become infected out of the camp.

The challenge has been returning them to play – and here Graham makes an observation that he hopes others might find useful. During recovery all players were monitored, with repeated physical tests and “no player has had the same return to play protocol. Every player as responded and recovered differently, with speeds of recovery varying from 6 to 16 weeks.”

The way out of this will be vaccination, but in the short term players respond differently to that – the policy is that no player will have any training for five days after each injection.

If Russia are to go to the Olympics everything must be right this time. The Olympics has always been very important to Russia, and the Soviet Union before that from when they attended their first Games in 1952, so a successful Olympic sevens team would significantly raise the profile of the sport across the country, and assist World Rugby’s vision to grow the game globally

“The most hard-working players I have ever worked with. True professionals. Arriving early for training sessions, with a real understanding of the game and a hunger to succeed”