Behind the unbeatable Czechs

From the lowest ranked international XVs team to back-to-back European Trophies in an unbeaten year of test rugby (plus a best-ever finish in sevens), 2019 has been a remarkable year for Czech women’s rugby, We have caught up with the coach and captain of 2019's only unbeaten team in women's international XVs to ask them how they did it. 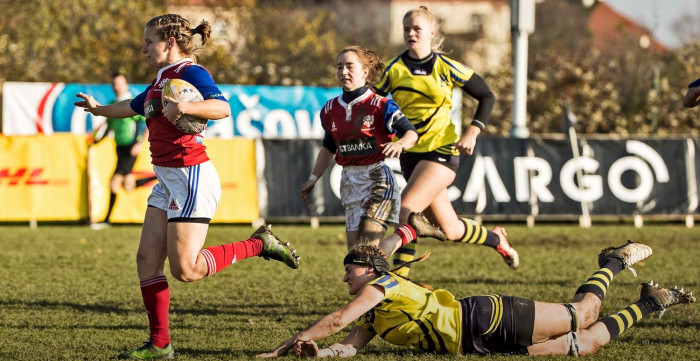 As 2019 draws to a close, and after thir second European Trophy titl,e Scrumqueens has take the chance to speak to Czech national coach Hana Schlangerová and captain Petra Křiklánová about women's rugby in Czechia and how they have achieved such success in their amazing year.

How did you both get involved with women’s rugby?

Hana: My brother used to play rugby since he was kid, and when I was teenager I got interested in playing too - but there was no girl's/women's team. I had to wait until I was at the university. At that time several people (both potential players and coaches) decided to build up a team in Prague and I joined.

Petra: My uncle was a coach of local club’s U10s and they did not have enough kids to play the game so he asked around and I started to play with boys.

As an amateur, what sacrifices do you have to make to be part of the Czech team?

Petra: Between players there is lots of girls who already work, study, have families, and so on so it takes up most of our free time, and not just for training but also rising some money for our games, because women’s rugby struggles financially at all levels.

Can you describe your feelings after winning the European Trophy for the second time last weekend?

Hana: I was incredibly proud of the team. More for who they have played and the dedication they've shown then for actually winning the Trophy. How much they improved over the past year. Amazed (once again) how much can a player can learn in such a short time when she is really into something.

Petra: It was an amazing feeling. Not just because we could celebrate the win on a home soil with all the families and supporters who came to watch us on Saturday but as well to see that all the hard work on/off the field is paying off

Before November last year Czechia had never won a test, since then you have never lost one. How was this turnaround achieved?

Hana: What we've just done (or at least tried to do) is what the players where asking for: we have offered them opportunities to develop for everyone who is interested, and introduced a bit of system in the game. The rest is the players' effort and will.

Petra: Apart that we have a great coaching staff who constantly believe in us and support us in everything it is a huge dedication and commitment of the players.

Has your success increased the profile of the game (especially the women's game) in Czechia?

Hana: I hope so! :) For some people women's rugby is still not supported. But there are now more people aware of women's rugby than ever before and the participation numbers are growing especially among the players. That speaks for itself.

Would you be ready to compete at the next level (alongside Spain/Netherlands/Belgium/Russia in the European Championship)?

Petra: I would say not at the moment, but during next couple of years it will be possible if we will keep progressing in the same way we have until today.

Hana: Closing the gap among us and teams like Germany/Belgium is our aim. We are getting closer, but we still have work to be done to reach them.

What is one thing that World Rugby and/or Rugby Europe could do to help grow women's rugby in Czechia?

Hana: Rugby Europe enabled the restoration of Women XVs Trophy, including financial support last year. Lately they have also increased the number of nations who can potentially participate in European U18 girls’ sevens competitions.

World Rugby is working to raise the profile of women's rugby through the Women's Development Plan and consequent campaigns and activities, including direct support for potential leaders.

From our perspective, it is our turn to use what they offer and help ourselves to grow women's rugby in Czechia.