How do you fairly anaylse and cover test matches where amateurs are playing professionals? With a mix of teams playing in World Cup quarterfinals this weekend, we take a look at the different perspectives. 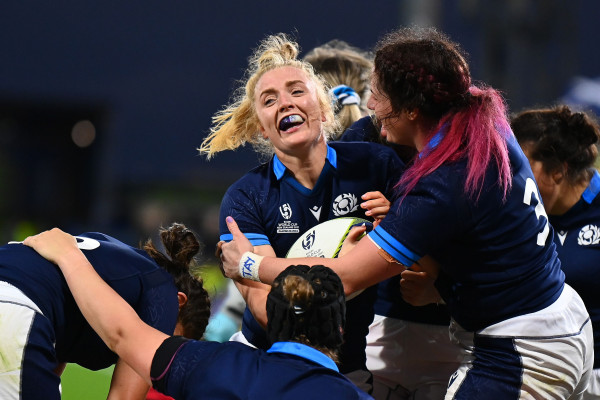 One particular article from Rob Roberts, in the Scottish Daily Mail, prompted some interest and critique from fans on social media.

In it, Roberts suggested that the team’s performances weren’t good enough, and that training together for three months in the lead-up to the event was enough of a level playing field to expect that Scotland should have been far more competitive, while he also suggested that head coach Bryan Easson be moved on.

The column attracted some criticism from supporters, with many pointing out that against Wales and New Zealand, Scotland were up against mostly fulltime players, and that they had in fact punched above their weight by qualifying at all.

It’s possible for both perspectives to be true.

The close manner of so many of Scotland’s defeats this year suggest that some changes are probably necessary to help the team to get over the line and start actually winning games.

Whether it is psychology or poor tactical nous, a team that loses so agonisingly, so often, late on in matches could be said to be both on the verge of a massive breakthrough while also clearly requiring some new ideas to get there.

The nub of Robert’s piece, and the reaction to it though, was not about any one specific failing on Scotland’s part, it was really about the challenge of fairly reporting on and analysing teams which are primarily amateur versus teams who are training together week in week out for a prolonged period in a professional setting.

This weekend’s World Cup quarterfinals are a case in point.

How can anyone meaningfully criticise Australia if, as expected, they lose to England, when their team is effectively amateur, with players receiving just ‘per diem’ payments and taking leave from their day-jobs to be at the World Cup?

Up against players on fulltime contracts for almost four years, how can they even be in the race?

Would it be fair then if they were badly beaten, for media to criticise their performance, or would it be unfair given the constraints within which they were performing?

Would it be patronising for media to applaud their plucky effort, or would it be more respectful to forget all of that and only focus on what happened over the 80 minutes?

As a fledgling sport, women’s rugby needs to be taken seriously and that is as true for how media report on teams and games, as it is for how the fanbase grows or how much investment it secures.

But it is not easy when there are so many imbalances across the elite end of the game right now.

As someone who’s been writing about women’s rugby for over 20 years, I think it was easier to report on the teams when for the most part they had parity of status,.

It’s true of course that unfairness is baked into all elite sport, but there is no imbalance quite like the one produced when some players are paid, and some are not.

Contracts in the women’s game are currently a messy web of fulltime and hybrid deals, while some countries are still reaching competition by competition payments.

Others, and this includes Scotland, are funding squads to get together for longer periods before major events, reaching agreement with employers so the players still have a job to go back to when it ends.

These technicalities apart, we can reasonably say that this weekend there are five ‘professional’ teams (England, France, Wales, New Zealand and Italy) playing three ‘amateur’ teams (Canada, USA and Australia) meaning that the semi-finals will feature at least one amateur team – most likely Canada.

If you think about it for too long, asking an amateur team, five weeks deep into an international competition in one of the world’s most physical sports, to go out and compete with players with all the advantages professionalism brings, is both deeply unfair and quite remarkable.

I don’t doubt though that Canada would want their performances on the field to be the only focus of any coverage they receive.

The media therefore have an incredibly tough job to do to strike the right balance  - because arguably the context within which a performance happens is as important as how many lineouts a team lost or how many tries they conceded?

Some grace must surely be given to teams who start with one hand behind their backs.

One day all these teams will be professional and none of this will matter, but right now it is a fascinating challenge of perspectives.

Finally, back to the Roberts column – which was primarily criticism of the Scottish Rugby Union (SRU) and not of the players - and the one massive piece of context he did omit.

There is no mention of the tragic death of Siobhan Cattigan and the impact that could have had on the team or on the abject failure of the SRU to meaningfully address it.

For me, any criticism of the SRU in relation to women’s rugby should continue to be focused not on what’s happening on the field, but rather on the organisation’s ongoing refusal to commit to an independent inquiry into the circumstances surrounding the player’s death.

The appointment of a new Custodian Board to oversee the game in Scotland has been suggested as one route through which this position may change.

Whatever impact it had on Scotland at the World Cup, it is far more important surely for the future of the women’s game there, that lessons are understood and learned from such a horrible, sad loss of life.

So when anyone is writing about Scotland – write about Siobhan, because she and her family deserve so much more.