With the world of rugby still far from back to normal we have decided to hold back on our usual annual awards again, but instead highlight the people and events that had the most impact on women's rugby in 2021. 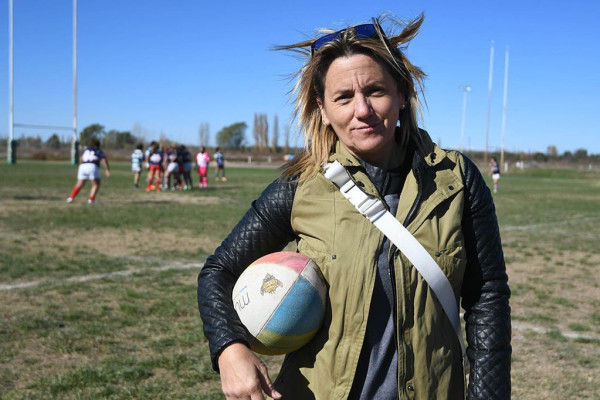 Today we look at some of the key women who have been taking the game to new heights in 2021. Sarah Hirini apart, we have chosen not to focus this year on current players, preferring to look at those making waves off the field and those having an impact in administration, refereeing, activism and coaching.

Maha Zaoui (Tunisia)
Maha Zaoui was appointed as Rugby Africa's first Women's Rugby Manager in 2020 vowing to "build something special in Africa" and she is living up to that already. Twelve African nations played test rugby in 2021 - only in Europe did (narrowly) more countries play test rugby in 2021. Her Africa Cup wrapper, under which the games were played, saw test debuts for five nations plus a return to test rugby after some years away for a sixth. Especially given the circumstances under which we currently all live, this has been a remarkable feat, which she promises is but the start.

Sarah Abd Elbaki (Syria)
Sarah Abd Elbaki is only 24-years-old,  yet this Mass Media and Communications graduate is proving a force of nature in Arab Asian rugby. Already the Head of Women’s Rugby Development in Syria, national team captain, assistant coach for Syrian Men’s team and the first Arab Asian woman referee, she was described this year by Asia Rugby as one of the most influential figures in the region when she was awarded one of just 12 World Rugby Women’s Executive Leadership Scholarships in 2021. With figures like Elbaki in the game alongside the move of Asia Rugby's HQ to the UAE in 2021, the importance of Arab rugby can only grow.

Barbara Pichot (Argentina) (pictured)
When the elder sister of Agustin Pichot was appointed as South America's first Women's Rugby Co-ordinator, it is fair to say that a few eyebrows were raised, not only because of the family link but also because Argentina has not exactly been one of the hotbeds of women's rugby on the continent. Someone from Brazil or Colombia was more expected. But Barbara has proven her critics wrong as she has started a campaign to build women's rugby in the region from the grassroots up, encouraging more youngsters into rugby throughout the whole of the region, as well as providing better coaching. Already there are strong indications that Argentina may finally make their test debut in the near future especially after four regional selections met in a XVs "scrimmage" at the beginning of December and join Colombia, Brazil and possibly Paraguay in a continental tournament.

Sara Cox (England)
In September Sara Cox became the first female referee to take charge of a men's Premiership game when she was appointed to the Harlequins v Worcester match, after becoming the first professional female referee in 2016. Her appointment raised the profile of women referees, but also the question of whether the celebration of her achievement implied that men's rugby is somehow a step above women's game - that we would not celebrate the reverse position. Realistically, perhaps, as things stand for a professional referee, the men's league is much better rewarded and Sara is paving a way for other women and girls who want to try to become professional rugby officials.   She also had the honour of officiating the Tokyo 2020 rugby sevens women's final.

Sarah Hirini (New Zealand)
Not since Farah Palmer has the captain of a women’s national team perhaps been so admired or at least celebrated, and Hirini has capped a magnificent year with an array of awards recently. Having led her team to Olympic Gold, Hirini also herself had a fantastic Games performance wise and at times looked like the catalyst for all that was good about New Zealand, especially in the tight matches against Fiji and Great Britain. She makes this list because the impact she has had across the game, becoming one of our most high profile stars and leaders in rugby.

The Irish 62
Cliodhna Moloney’s ‘slurry’ tweet started it, but this year ended with 62 of Ireland’s leading players – past and present – demanding change to how the women’s game is led and run in Ireland, in a brave and defiant move which dominated Irish sports news for well over a week before Christmas. Four key players – Moloney, Lindsay Peat, Claire Molloy and Ciara Griffin – have since met both with the relevant Irish government Ministers involved and Sport Ireland, and are due to meet with the IRFU in January. With a new CEO leading the union, change is in the air and these players may well have been the catalyst for change for the better forever in Ireland.

The Welsh 123
In the same vein, some 123 former Welsh players joined forces earlier this year to publish a blistering letter to the WRU saying they “cannot stand by and watch the women's game deteriorate any further". Within months the  WRU announced that players would be offered professional contracts for the first time and though there remains a long way to go in Wales, progress is being made at last.

Danielle Waterman (England)
The retired England fullback has been adding to her broadcasting portfolio in recent years, commentating regularly for Channel 4 and ITV. Earlier this year in a compelling documentary, Finding Her Voice, she laid bare the impact trolling and online abuse has had on her, and she has ended the year with the announcement that she is to be the first CEO of the Women's Rugby Association (WRA), a new player's union to represent the top-flight of women's rugby Premier 15s in England. Quite the impact.

Emilie Bydwell (United States)
With a serious pedigree in the women’s game, Bydwell has become the only female head coach on the World Series, having been appointed to lead the USA team recently. Bydwell has risen through the ranks in the US system, from player to coaching along the national programme pathway while she also served as the USA Rugby Director of Women’s High Performance. Her appearance on the sideline of the World Series is perhaps overdue and one which will surely spark more women taking on leading coaching roles.

Fiona Stockley (England/the Barbarians)
Stockley has been the driving force behind the women's Barbarians team, having previously run the Nomads representative team. She's done every role across both teams from managing the programme, helping to secure players and coaches and organising travel and kit,. Having led the discussions with the Barbarians men's set-up a few years ago, she has helped establish the women's team as a new force in the game and deserves enormous credit for her work in helping to bring the game against South Africa to Twickenham, with its record crowd and TV audience.