Wales 7s and 15s player Philippa Tuttiett is juggling more than just rugby as she prepares for the World Cup this summer. A builder by occupation, Tuttiett can be found on Channel 5 with a new show called My New Home for 5k in between training with her Welsh team mates. She looks back on a hectic few months. 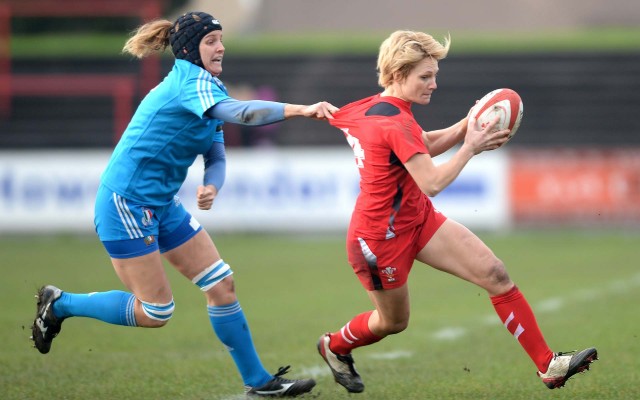 The end of the Six Nations for most players is time to rest up and book in with the physio but for me this was a time to catch up with work.

I'd been really lucky to be cast for a new TV show called 'My New Home for 5k" which has just started on Channel 5, and even luckier to find out that it was timed perfectly for when Six Nations ended and before Sevens started.  I had to juggle training around quite a  bit, but a new TV show was a great opportunity and where there’s a will there’s a way!

I got my schedule through and found we were filming all through March, April and May. The concept of the show is that Linda Barker redesigns someone’s house for 5k and myself and one other builder do all of the work. The shoots were pretty hectic, 10 days straight 8 till 8, however, I love new opportunities and who knows where it may lead.

During the first shoot it transpired that we'd taken on way more work than we could fit into ten days.  I hadn't been that tired and stressed in a long time but fortunately for me this shoot corresponded with my official two weeks off training so at least I didn't have to worry about missing training and when we eventually finished I managed to get back to Cardiff for four days well deserved rest!

I say rest, however back in Cardiff training had started. A typical 7s week starts with Welsh 7s squad session on a Monday evening and then we were in the gym on Tuesdays, more 7s on Wednesday then fitness on a Thursday. This season’s preparation and contact time was the best it has ever been. We also had a new coach involved with Richie Pugh so it’s exciting for the 7s programme.

In between that it was back to real work as a builder. I’ve worked really hard to build up the company so now that I can delegate work; however being the control freak I am I will always try to be on site and get stuck in.

After that “rest” before I knew it was Friday and back to London to film episode two.  I’d decided to train before work each day rather than after just in case filming over-ran so there were some long days. I was camped out in a Holiday Express with no gym! However, there was a pretty big car park and I was able to set up my "watt runs" easily enough! At 6.30am on Saturday mornings, I was running around the car park and running shuttles from the disabled parking space to the curb 40m! Who needs a fancy gym?! It only takes 30 mins for a good blow out and then I was off to the shoot.

The production team were great and loved that I play rugby for Wales. I’ve been telling them all about the women’s rugby set up - it amazes me how many people still don't even know that their country has a women’s team, let alone a Six Nations and a World Cup!

I was missing a lot of team training that week, so I keep in touch with the girls to make sure I'm up to date on everything because I knew that in another three weeks I'd be back in Cardiff full time training. . . I couldn't wait!

Time flew by and before I knew it, it was the final shoot and I’d just been invited by the Wooden Spoons to join them in Kinsale to play 7s which meant finishing filming on the Thursday then flying on the Friday - fantastic!

S aftera very hectic two months of filming, dashing back and forth from London I went home for about 12hrs, re packed and left for  Kinsale! A quick phone call to update the parents, a dash to the airport and I managed to miss my flight! £100 later, a diverted flight to Dublin and a 4 hour bus journey to Cork and I was back in the game! 7's season had officially begun . . .

With Wales, we played in three tournaments leading up to the FIRA European competition in Moscow and Brive. With all the highs and lows a 7s season can bring, overall we had a very positive season, with new players gaining more experience, and everyone developing not only as individuals but as team.

The 7s work has laid a fantastic platform for players to kick on towards our World Cup campaign, which starts this weekend as we take on USA on Saturday.

"My New Home for 5k" is currently showing on Channel 5."

Philippa Tuttiett plays 15s and 7s international rugby for Wales. Outside of rugby she runs an all female building company in South Wales and has a TV show with UKTV called DIY with Philippa; as well as having starred in Channel 4's The Renovation Game. She currently on a new Channel 5 programme.