The story behind our Data Hub

How a women's Six Nations match in 2006 lead to the first complete database of all women's international rugby results. 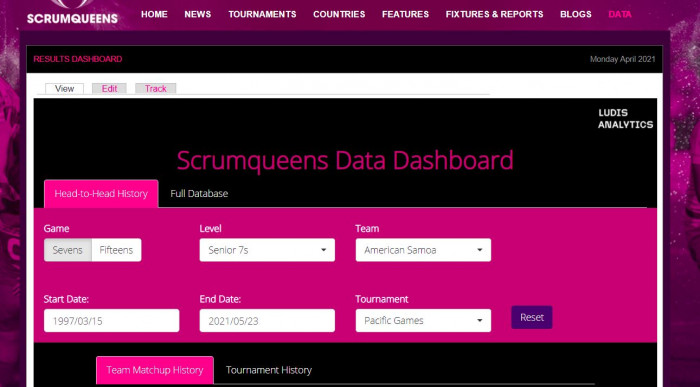 I was present at the match as my daughter’s team was doing the Guard of Honour at the start, and – as the game had the most basic of match programmes - came home wondering whether England had won the tournament before, and how that result compared with others the teams had played and so on.

I turned to the Internet and found, as near to nothing as makes no odds. There were a few exceedingly random reports of a few games on BBC and RFU websites, but other than that silence.

No records, no scores, no tournament histories. Nothing.

I approached one of the leading names in rugby statistics and received a one line replay – “no-one is interested”.

Well, I was damn well interested, and suspected I was not alone.

And so, began what would become a five-year campaign to track down every women’s test match – and along the way every women’s sevens international. Helped by a network of enthusiasts around the world who help search websites, books, newspapers and magazines in many different languages throughout the world – and a Wikipedia page that began with more blanks than results but which was gradually to be filled in with the last obvious gaps being closed in in 2011.

In practice Wikipedia is far from ideal, so the data moved to a spreadsheet allowing for quicker searching just in time for the 2010 World Cup on Sky, with the database being the source of almost all of the statistics that the commentary team used – because they were not available from anywhere else. And, having become part of Scrumqueens, it became an essential tool for the new website.

The spreadsheet also began to be routinely sent to commentary teams and journalists anywhere and when World Rugby finally wanted to launch a rating system for women’s test rugby again this was again the source that was turned to. Because there was nothing else.

But the question of how to make the information easily available to everyone – every rugby fan – has been a long term challenge that I and Scrumqueens have puzzled over, not least because the development of such a resource was well beyond the site’s resources.

Until this year when the wonderful people at Ludis Analytics came along. With a great women’s rugby background they took on the task and allow us, today, to launch the Scrumqueens Data Dashboard.

What can you find on Dashboard

There is no player information because,  well, there are limits.

It should also be added that the definition of what a “test match” is (and is not) in women’s rugby is about as clear as mud, especially prior to about 2010, and ultimately what we list is our interpretation. When and if someone in authority sits down and decides once and for all whether, (for example) the Irish President’s XV v England in 2008 was or was not a test (Ireland said it wasn’t, England said it was, and awarded caps) we will honour their decision. But until they do we follow the opinion of the home team (or tournament organiser).

There may also be tests out there that we have not heard of (like Trinidad vs Venezuela in 2001, which we only uncovered a couple of years ago) and it will be wonderful if the publication help find a few more untold stories of women’s rugby.

In the meanwhile, please enjoy, play with, share, and even republish the data (its free, but if you can give Scrumqueens a credit that would be cool). Women’s rugby has a proud history, and this is one more step in getting that known.

John Birch is a wide ranging contributer to this website, penning detailed previews and reviews of the game from around the world. John has also established a superb fixture archive on the women’s game.