USA flyhalf Hannah Stolba tells us why changing the ball size in the women's game would be a mistake. 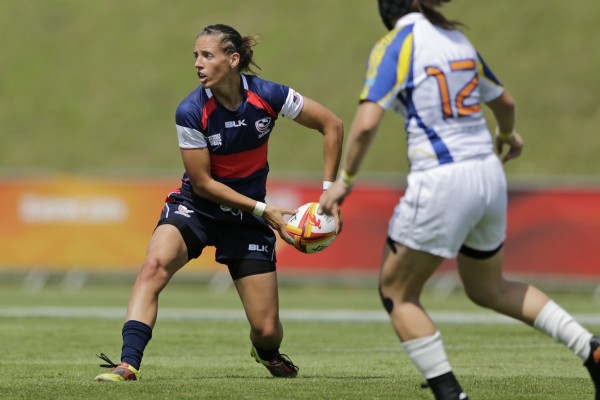 A debate kicked off online recently about the idea of changing the size of the ball in the adult women's game with many suggesting that it could speed up passing and improve kicking.

USA flyhalf Hannah Stolba contributed to the debate voicing opposition to any such idea, so Scrumqueens.com asked her to give us her thoughts.

"I followed with interest the discussion in the rugby community  online recently about reducing the size of the match ball for women as a means to potentially closing the gap in skills performance between men’s and women’s game.

I truly believe this is a short-sighted stop-gap and would do a disservice to the sport of rugby.

Up to this point, rugby has been one of the few sports that male and female players alike have participated in on equal footing. The laws are the same, the ball size and field metrics are the same and the positions and length of game are the same.  That is one of the things that I and many other players and fans love about the sport.

I grew up playing basketball and loved playing pick-up with my male counterparts – but I always had to adjust to the size of the ball.  With rugby, I pickup at 7s practice with the boys at Glendale and feel comfortable stepping in because I don’t have to make any adjustments to my pass or kick.  I can just play.

But even beyond my love for the game’s equality, the fundamental flaw with this proposed change is that it fails to acknowledge two other factors that have a far greater impact on women’s skill level than the size of the ball– the resource inequity between men’s and women’s rugby, and the disparity across the world between professionals and amateurs.

Comparing the skill levels of men and women is similar to comparing the performance of countries in which rugby and professionalism is an everyday part of life to countries where the majority of players are amateurs and don’t pick the game up until high school or college.  For example, the US men don’t get to train full-time or grow up with a rugby ball in their hands like New Zealand players do, so they are inherently going to have to spend more time working on skills to catch up.  Similarly, most women, even those skilled enough to play at the international level, are amateurs with full-time, professional jobs limiting their abilities to train full time compared to their male counterparts.

Most, if not all, professional male rugby players have played the game regularly for most of their lives and now get paid to play every day.  And yes, many of those players may have better ball handling skills than the average women’s player.  Consider that the men’s skills are better because they have spent much more time on those skills.  It is far too simple to blame that skills’ disparity on the size of the average woman’s hands.

Although such an answer is more complex, it is far more likely that the main cause of the skills’ disparity comes with an extensive discussion about professionalism and amateurism.  And if we can acknowledge that, we may be able to have a more meaningful conversation about the resources allocated to women’s rugby and the importance of professionalising the sport, especially in countries where rugby is less traditional.

I, along with many other female rugby players, urge the rugby community to support the growth of women’s professional rugby – with continued equality in rules, pitch dimensions and ball size - instead of supporting what is, at best, a quick and ineffective fix to a more complex problem."

Hannah Stolba is a fly-half/fullback for USA and plays her club rugby at Glendale.