Travelling to the game: an African tale

A couple of years ago Ireland's epic odyssey to a Six Nations game in Pau, France, attracted headlines - but they are not the only team to to face travel misery before a big game. Last weekend the epic journey of Ugandan centre Helen Buteme and her team-mates to Kenya for their vital World Cup qualifier kept her followers of Facebook enraptured for most of a day. Would she make it to Nairobi for the game? Helen relives the story for us. 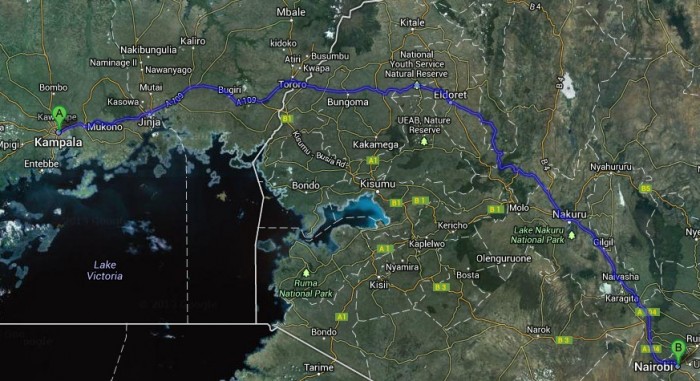 Uganda’s women’s national rugby team, Lady Cranes, was set to travel by road from Kampala, in Uganda to Nairobi, Kenya (distance 666 km, or 414 miles) on the evening of 12th June on Queens Coach, for the match on 15th.

However, plans were changed and the team was split with 7 players joining the men’s national team, Rugby Cranes, on Queens Coach while the rest of the team travelled on Easy coach.

The Easy Coach group left at 1830 and apart from a one hour hold up (reasons unknown) in Eldoret they travelled to Nairobi through the Malaba border without any mishap and arrived at The Strand Hotel in Nairobi West early the following day (13th June).

It was a different story for the group on the Queens Coach who left Kampala two and a half hours later.

Slightly over two hours out of Kampala the bus developed problems with the clutch.  Comments from the male players revealed that the clutch was fried or roasted depending on who you talked to.  It took about an hour for make-shift repairs to be made and the bus was able to set off again.

Barely half an hour later, the clutch was up to mischief again and this time round the driver and his co-driver opted to have another clutch sent from Kampala to replace the faulty one.

It was not until about 0230 that the bus resumed its journey and at snail’s pace.

Eventually the bus gets going again. However by this time the passengers were very hungry and irritable and commandeered the entire stock of biscuits and soft drinks on the bus that were meant to be for the return journey.  Not much for a bus load of rugby players but the sugar rush kept the players sane!

This estimate proved to be slightly optimistic!

The bus crawls into Nairobi without any more drama.  The trip had taken a record 21 hours and there were very exhausted and grumpy players who came off that bus.

The ladies were dropped off at The Strand Hotel where they found that the rest of the team had gone for an evening run to shake off the travelling blues.  The seven stragglers had an early night

The next day, the entire team had a 1 hour session at the RFUEA grounds on Ngong road, followed by a pool recovery session.  After lunch, the team had a 40 minute captain’s run at the Moi International Sports Centre, Kasarani.

*The return journeys were uneventful with both buses making the trip back in about 14 hours.  Lady Cranes rested on Monday and were due for a training session on Tuesday to correct the mistakes from Saturday’s game.

Fun loving, book worm with a rugby addiction (some call it an obsession).Centre for Uganda, and pretty much any other team who will have her. Never known to attend a tournament (even as a spectator) without bringing some boots - just in case. In her other life, Helen is a tuberculosis immunology research scientist.